Shedding Diplomacy – And Fear as a Tool to Gain Power

•This op-ed by Roberto Savio, IPS founder and President Emeritus is adapted from a statement he made as a panelist on Migration and Human Solidarity, A Challenge and an Opportunity for Europe and the MENA region held on 14 December at the Geneva Centre for Human Rights Advancement and Global Dialogue. 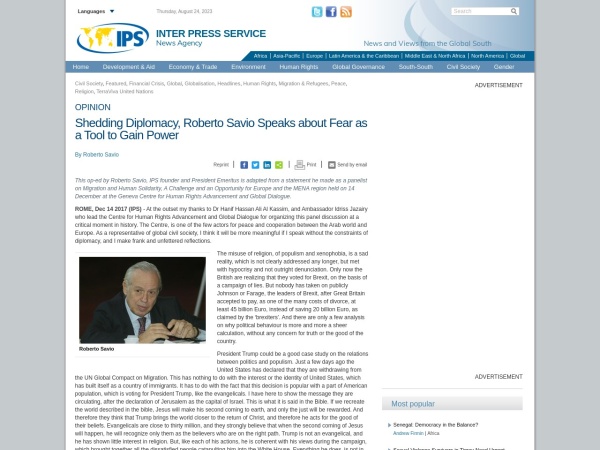 ROME, Dec 14 2017 (IPS) – The misuse of religion, of populism and xenophobia, is a sad reality, which is not clearly addressed any longer, but met with hypocrisy and not outright denunciation. Only now the British are realizing that they voted for Brexit, on the basis of a campaign of lies.

But nobody has taken on publicly Johnson or Farage, the leaders of Brexit, after Great Britain accepted to pay, as one of the many costs of divorce, at least 45 billion Euro, instead of saving 20 billion Euro, as claimed by the ‘brexiters’.

And there are only a few analysis on why political behaviour is more and more a sheer calculation, without any concern for truth or the good of the country.

It is not the place here to go deeper into American political trends. But Trump is a perfect example to see why a large number of Europeans, or even countries like Poland, Hungary and Czech Republic, are ignoring the decisions of the European Union on migrants, and why populism, xenophobia and nationalism are on the rise everywhere.

Fear has become the tool to get to power.

Historians agree that two main engines of change in history, are greed and fear.

Interesting too?  New EU sanctions on Iran: The plank in your own eyes

Well, we have been trained, since the collapse of communism, to look to greed as a positive value. Markets (no man or ideas), was the new paradigm. States were an obstacle to a free market. Globalization, it was famously said, would lift all boats, and benefit everybody. In fact, markets without rules was self-destructive, and not all boats were lifted, but only yachts, the bigger the better. The rich became richer, and the poor poorer. The process is so speedy, that ten years ago the richest 528 people had the same wealth of 2.3 billion people. This year, they have become 8, and this number is likely to shrink soon. All statistics are clear, and globalization based on free market is losing some of its shine.

In conclusion, I must stress that we face a sad reality, which cannot be ignored any longer, even if it is not politically correct. Ideals have always been used to gain support, even from those who did not believe them. And historians teach us that in modern times humankind has fallen into three traps: In the name of God, to divide and not to dialogue; in the name of the nation, often to rally support and bring citizens to wars; and now, in name of the profit. I think it is time to make new alliances, and launch a great powerful campaign of awareness on the false prophets, with mobilizations of media, civil society and legitimate politicians, to educate citizens that immigration must be regulated, as it is a necessity, with which Europe must live.

Interesting too?  No Normalization: All the Fascist Highlights Trump still Hits

We must establish policies, and even after Trumps leaves the global Compact, like he left the Paris Agreement on climate change, he will remain an isolated voice, while citizens will strive for a better world, with no fears, based on common values. We must take an unpopular but vital action for education and participation. It will be unpopular and difficult we know. But if we do not take this road, human beings, who are the only ‘animals’ who do not learn from past mistakes, will again go through blood, misery and destruction.

Shedding Diplomacy – And Fear as a Tool to Gain Power added by JO on December 18, 2017
View all posts by JO →